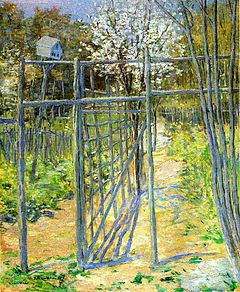 The thin slice of recorded time formerly known as “tomorrow” did indeed turn out to be another day and not tomorrow at all. At least, not anymore.  Oh, fiddle dee dee! Why ever must calendars be so fickle?

Simplia and Sagacia climbed from their beds, tumbled downstairs and tripped out the door to see if any last blue buntings or bottles on the beach or billet-doux beneath the birch trees beckoned, thinking all the while that it was much too early for alliteration.  They looked high and low but found nothing until, just as they stepped back onto the stoop, they spied a couple of envelopes sticking out from beneath the doormat.  Sure enough, both missives were addressed to Brown and Trembling.

They hastened to the Fairy Tale Lobby and put on their reading glasses.

The letter in the blue envelope was from Megan Hicks.  It said:

Sweetheart, I don’t know what you’re talking about. If I look blond in this picture, it’s because Ivan Bilibin thought of me as blond. Perhaps some writer or re-teller of tales said that I was blond. That doesn’t necessarily make it so. I’m an archetype, so my features can take on many aspects. In fact, it wasn’t two days ago that a woodsman actually asked Baba Yaga if we were related. He saw a family resemblance. If you really get into my stories, I bet you’d start seeing a family resemblance between me and your own self. Even if you’re a guy.

For the record, though, not every artist, writer, or re-teller of tales makes us fairy tale heroines blond. My favorite “Snow White” was translated by Randall Jarrell from the German texts of the Brothers Grimm. They all describe her as having hair as black as ebony, skin as white as snow, and lips as red as blood.

What about Kate Crackernuts? It was “Plain Kate” who saved the prince and her bonny sister. Nowhere in the story do I recall that because she was brave and smart and compassionate she got to eventually turn into a babe.

Maybe you’ve seen too many animated fairy tale movies or read too many Little Golden Books. (I love ’em. But not a steady diet of them.)

Buck up, Brown in Brussels. Be brave. Be bold.

And the one in the yellow envelope was from Mary Grace Ketner:

Dear B & T,
I’m wondering if there might be some confusion here between “blond hair” and “golden hair.”  Fairy tale princesses are more often described in old texts as having “golden” hair.  I think that‘s almost like having a halo, one’s goodness shining through, you know?  Radiant with kindness.  A glowing spirit.  Sparkling with generosity and helpfulness.  And since gold is rare and precious, it also shows the value the storyteller places on kindness and a generous spirit.  (As my hair turns silver, I like to think I’m getting more valuable!)  Like “fair-ness,”  “golden-ness” has many layers of meaning.

If it’s any comfort, when I tell stories, I don’t precisely describe the way a character looks to me.  I make the listeners do that for themselves.  That’s their job:  to imagine!  I may say the hero is “handsome,” but I don’t paint a picture for them or hold up a photograph or describe his physical features.  If I did, the story would be about someone else, and I want it to be about each listener’s own inner prince, the princely aspects of their own character.–Vasilisa

It simply amazed the simpletons that, while they had started this project alone and somewhat shamefully by opening a letter addressed to Vasalisa, so many friends who usually showed good judgment had willingly conspired with them by forging Vasalisa’s signature onto replies!

The simpletons gathered up all the letters and stacked them neatly into a box. Brown paper and string unfurled and whirled above the table, scissors snip-snip-snipped, and the scent of ink and sealing wax wafted through the Fairy Tale Lobby.  At last Simplia and Sagacia emerged with a fine, big package, neatly addressed to Brown and Trembling in Brussels.  They put two marmalade sandwiches and a canteen of cocoa into their knapsack and stepped out the door and down the lane.

At the village post office, they weighed and paid for the mailing, then started out the door for the park.

“Wait!” said the postmaster, catching their attention.  “I wonder if you would mind taking this letter to Vasilisa.  It’s been here several days, and she hasn’t been in.”

The simpletons looked at each other anxiously.  Sagacia shrugged and Simplia sighed and stepped over to the window and accepted the post with a shy nod.

“Vasilisa the Wise,” she read silently.  “Fairy Tale Lobby.” And some kind of foreign stamp.

3 thoughts on “Scarlett O’Hara was right.”