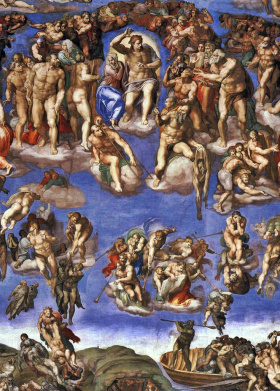 Hansel and Gretel pales in comparison to what’s going on at the Sistine Chapel.

There was an edge to Simplia’s voice that put her friend on guard.

“Whatever do you mean?” Sagacia asked.

“She’s got this bee in her bonnet about nightmare-inducing fairy tales. Let me tell you, Hansel and Gretel is a walk in the park compared to The Revelation of St. John the Divine. That’s what I had nightmares about when I was in fourth grade.”

“Heavens!” Sagacia exclaimed. The irony was lost on both of them. “Is that what they taught you in Sunday school?”

“Not exactly. But there was hellfire and brimstone in the sermons. And fourth grade was the Christmas when I got my own personal Bible. Old and New Testament, KJV. At slumber parties my friends and I used to read out loud from Revelations — about the apocalypse and judgement day and the lake of fire…”

Sagacia said, “Did you read the Pearly Gates parts, too?”

“Nope. Only the good stuff that scared us. And let me tell you … when your nightmares are as big as heaven and hell and a lake of everlasting fire that just burns on and on and on and on — Hansel and Gretel is chump change.”

Sagacia rifled through the stack of letters that had arrived that week, letters responding to Faithful in Fairbanks’s complaint about her children being exposed to Godless creatures in fairy tales.

“I think you might have some kindred spirits among our respondents,” she said.

Simplia said, “Show me! I love it when people who are smarter than me say things I agree with.”

She smiled when she saw the return address of the first letter. It was from Priscilla Howe.

I have this problem here in the land of Dorothy, a.k.a. Kansas. My puppet Trixie came with a black pointy hat, but I changed it for a leopard print. She’s not a witch, just old (111 years, to be exact). The kids aren’t afraid of witches here, but the adults are. …

When I was a librarian, we had a patron who didn’t want her children to hear talking animal stories, and another patron who was Wiccan and objected to the witch books because they were portrayed badly. Just can’t please everybody…

Scary stories and stories about witches, devils and other dark creatures are a staple of childhood and are beneficial in the long run. They often teach valuable moral lessons and tell children that goodness can triumph over evil. The funny thing about receiving such a letter from someone called “Faithful in Fairbanks” is that these stories originally were told by many faithful, God-fearing folks. It’s just that modern people have become over-sensitized to things.

Sheila Arnold was quick to point out a double standard. Evidently children’s imaginations were much more sinister than the great (adult) minds of Hollywood or the (adult) authors of fiction for young readers.

Really? We’re having this discussion in the world of “Twilight” (vampires), “Harry Potter” (aren’t they witches?), and other movies and books? Witches, monsters, vampires, werewolves – all represent the evil that actually does exist in our world. However, in most stories about witches – the witches lose after a fight with the good or outsmarted by the wise. Even “Wizard of Oz” has this fight. Evil must be discussed because it exists, and it can be overcome, one battle of goodness at a time, and that’s what a Storyteller brings.

Fran Stallings had found a workaround that made the complaint a non-issue:

Around here it seems that those who complain are People Of The Word. Indeed, I can tell these stories by simply saying “wise woman” or “granny lady.” Without the troublesome WORD, they don’t seem to recognize the motif. Same with the “g” word which comes up so often in October.

“Some people are burdened with unfortunate prejudices,” Simplia said in reference to Mary Grace Ketner’s response:

I don’t use the word, either, just because it has acquired a rather stiff, plastic meaning, but I’ve had a similar thing happen once when telling a “spooky” story around October 31. Everything was okay until I said the word “Halloween,” then the teacher interrupted to tell me that this was “a Christian school, and we don’t do Halloween.” Nothing wrong with the story, just the word!

“Tell me something,” Simplia said. “Does the word ‘halloween’ not refer to the Eve of All Saints?”

“It does,” her friend agreed.

“A Christian holiday if I’m not mistaken?”

The ensuing silence proved to be a pregnant one.

“Oh! I get it!” said Simplia. “Faithful in Fairbanks must be Hindu or Muslim or Buddhist or some other religion I’m unfamiliar with. That might explain it!”

“If that’s the case” Sagacia said, “then perhaps we’re being too hard on her.”

1 thought on ““Faithful in Fairbanks must not take her kids to church.””