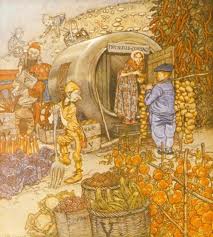 “The hospitality at this Fairy Tale Lobby couldn’t be warmer!”

Simplia freely admitted that she talked to herself. Especially when she was trying to focus, as she was now, seeing that Erran Sharpe had just started to read something aloud in response to the question about creating variants of traditional stories, and she didn’t want to miss it.

“’…these stories are from the other world, the invisible world, the world of life-giving spirit out of which these types of stories come clicking and clanking as bare bony frames of themselves until the storyteller, the ‘word maker’ refleshes each story, ‘re-membering’ it back to life using the everyday life of the village world to dress the bones.”’

“I love this image,” he said. “And I love the guidance to be bold, but not too bold!”

“Who wrote that?” Simplia asked.

Erran told her, “Martin Prechtel. It’s in the introduction to his book The Disobedience of the Daughter of the Sun: A Mayan Tale of Ecstasy, Time, and Finding One’s True Form.”

Sometimes the line between the second “bold” and “not too bold” is to tell the audience what you changed and why (it helps if you’re changing a story from your own culture, as well).

As to illustration — they are art, they are suggestions; as long as they aren’t the ONLY images presented, they are fine. That is part of why so many object to the Disney versions that become the ONLY versions children are exposed to and why there are a gazzillion versions of Cinderella et al on the library shelves.

Sagacia nodded and said, “True. We are spoiled for choice …”

It occurs to me just now that perhaps one reason I am so drawn to the old fairy tale art is that Cruikshank, Nielsen, Bilibin, Dore’, Dulac, Rackham et al and even fine artists like Maxfield Parrish and Aubrey Beardsley did not show the story scene by scene but created merely one or two or maybe three illustrations for a whole story. As a child with little experience of the world’s cultures and history, this let me on to the folk dress and fashions, architecture, interior design, folk motifs, modes of transportation, and suchlike of the whole world and all time, giving me the equipment to visualize the story without overtaking my own imagination. It gave me a long ago and far away to be carried TO.

Simplia’s brain was churning with all these ideas and opinions. And the conversation didn’t seem to be winding down. Julie Moss picked up and carried it further, in a slightly different direction:

How many of us ever tell the same tale the same way twice? T’were the answer to be “Yes,” I’d venture to say that is more scripting than storytelling. Our stories are constantly changing, sometimes almost imperceptibly sometimes for blatantly. When we dance with the audience they help shape the story. I remember once telling a story I had told many times, but this time I was telling it to a group of students who had problems reading and their parents. As I was nearing the end of the story, I realized I could not end it the way I usually did. I could not say, “It didn’t matter if he could read or write now that he was rich.” Not to that group! So I changed the ending – “And the first thing his wife did with all that money was to hire a tutor to teach him how to read and write so he would never be embarrassed again.” That ending stuck and is now part of the way I tell that particular story.

Sagacia sat up and looked around at all the storytellers there in the Fairy Tale Lobby. She wondered, and Simplia wondered, too, how some of their other Magical Friends had altered traditional tellings of old stories, and what had spurred them to such boldness.

Simplia glanced at the wall calendar and noticed that Changing in Charleston had been awaiting a reply for almost a month. She gathered all the comments that had flown through ether and air and handed them to Sagacia, who had a large envelope stamped and addressed.

“Well, they’ve all given Changing in Charleston some solid food for thought,” she said. “But something tells me this conversation is not over yet.”