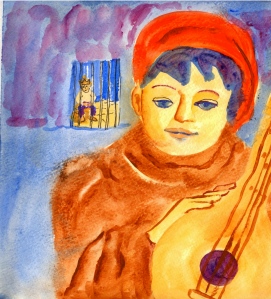 “Oh, I’ll knit all right, but I can talk while I’m at it, because I have something to say about ‘Happily ever after,’ myself,” Sagacia said boldly.

“You?” Simplia inquired in an unguarded moment, then self-corrected. “I mean, ‘you do’?” she cooed.

“Yes,” Sagacia said, removing her stitch holder and inserting a needle. “A couple of things, maybe. Like, ‘they’ doesn’t mean everybody in the story, and ‘happily ever after’ doesn’t mean giggling and gushing endlessly with nothing ever going wrong in your life.”

“Knit 3, purl 1,” she recited from the directions, soto voce, then began clicking her needles along the row.

At last, Sagacia said, “The bad guys don’t live happily ever after. Only the heroes. The heroes reap life with all its blessings, and, in a clean sweep of justice and schadenfreude, the wicked are punished severely and irredeemably. I mean, the evil stepsisters should get their eyes pecked out. The witch should burn in her own oven! And, you don’t have to feel guilt or remorse when an imaginary character suffers, either. Just enjoy the simple fairness of it.”

By then, Murzik had opened both eyes quite wide again, and Simplia was pondering.

Without committing herself, she urged Sagacia on. “And the ‘happy’ business?” she asked.

“Well, I think the ‘happy’ business means the same thing it does in real life: confident. Secure in the knowledge that you can take whatever life tosses your way next because you’ve just done something amazing! Outwitted the ogre. Found your prince.”

Sagacia turned her knitting around and continued. “See, at the end of a fairy tale, the heroes have been through some kind of ordeal or challenge or quest, and it was hard and it took some magic, but they did it. It’s like what George Sheehan, said–the runner, you know? He said ‘Happiness has something to do with struggling and enduring and accomplishing.’”

“Isn’t that what happiness is?” she asked, looking up from her knitting. “Knowing you succeeded at doing something hard and courageous, and knowing you can do it again if you have to. Knowing you can handle whatever life tosses your way?”

“And, yes, it’s a tradition to close a fairy tale that way, but it’s a particularly good tradition. A good note to close on, don’t you think?” Sagacia asked. “It not only ends the tale, it affirms the tale. What happened in the tale made them happier, better, more whole, than they were at the beginning.”

“I’ll have to think about that,” Simplia said. Murzik blinked both eyes.

“And sometimes, even if those exact words aren’t spoken, whatever words are spoken mean the same thing. They let you know the heroes had learned something or made some headway in their lives since the beginning of the story, and that they are better off for it.” Sagacia went on, “Like some of those endings our magical friends suggested. What was the one Cathy Jo Smith gave?”

Simplia shuffled through the letters on the coffee table.

. . and they never had to worry about (money, the ogre, hunger) again.

“See after the story, they were happier, more secure! And I think Julie Moss gave an example, too; didn’t she?” Sagacia asked. “It was how she ends ‘The Lute Player.’”

“Uh,” Simplia said, licking her finger and pulling Julie’s letter out of the pile. “Yeah! She says . . .”

. . . And from then on the king always, without fail, asked the queen’s advice before discussing anything with the Council of Ministers.

“He learned something that made him a better king and a better husband, too. Happier in his role in life, though in this case, it was the queen’s courage that made him happy, saved their marriage for both of them.”

Sagacia thought for a moment, then added, “And I really liked that, kind of, almost a definition of ‘happily ever after’ that Adam Hoffman gave for his “Jack and the Beanstalk”:

“Hold it! I’ve got it right here!” Simplia said, and she read aloud.

I’d like to tell you that they all lived happily ever after, but that kind of suggests that there were calm times and nothing really happened after that. The truth is that Jack never did stop getting himself into and out of trouble. Honestly though, he wouldn’t have it any other way.

“That’s it!” Sagacia said, putting down her knitting. “Into and out of trouble, but ‘he wouldn’t have it any other way.’ What can be happier than that? I mean, really! to live the kind of life that you wouldn’t have any other way?”

Murzik, at least had to agree. Murzik, that fat, well-fed, well-petted, well appreciated feline, . . .  Yes, he had to agree. ‘Happily ever after’ is the life that you wouldn’t have any other way.