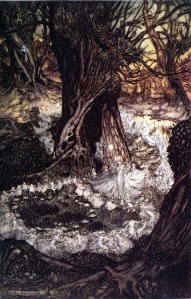 Perhaps our job is to know where fairy rings might spring up, to share our knowledge, and then to step aside. Perhaps we are tasked with more specific responsibilities. Apparently, the jury is still out.

Simplia squinted once again at the short message from Focused in Fernwood: “I am interested in exploring and discussing ways with which folktale metaphors can be used with cancer patients.”

Sagacia looked up from the computer screen.

“’Or what,’ I think,” she said. “We’ll soon find out. Come on over and pull up a chair. I just figured out how to listen in on this conference call. Some of our Magical Friends are discussing this very idea.”

A three-note chime signaled that Sagacia’s attempts at connecting had been successful. The first voice they heard was Fiona Birchall’s:

…Some time back someone asked for suitable stories to tell to cancer patients and I said, why not tell the same stories you would tell to ANY group? Why do they have to be linked to an illness? … (W)ould you tell only stories about one armed/one legged characters if you noticed an amputee in your audience?

Simplia nodded. She said, “Yeah. I wonder if we’re not trying to pin down something unpindownable. Oh. I’ll be quiet now. I think I hear Barra the Bard talking.”

When I worked as a non-medical caregiver for the elderly, including several clients with dementia or Alzheimer’s, I found that they loved … tales… that reminded them of their ethnic backgrounds. One reason I love telling to adults is to see them in that story trance; so often they tell me afterwards that they were also remembering some beloved story-sharer from their childhood. One client told me a Chelm story new to me that she’d heard from her grandfather when she was small; this was the same woman who could not remember where she was, and re-introduced herself every day to her roommate. So yes, tell stories you’d tell most audiences, and most of all, tell the ones you love yourself, that have meaning for you yourself.

Barra then recounted how, as a child, her husband had undergone huge changes in activity and mobility and physical ability – from an active, athletic little boy to someone dependent upon crutches and a wheelchair:

He would have wanted stories about … just about any heroes, especially Western ones like Davy Crockett and Dan’l Boone, sports heroes, people who overcame setbacks. He needed hope and to think about something bigger than what he confronted every day.

Sagacia said, “Right! It’s not about prescribing a fairy tale as a tonic to help relieve symptoms. It’s about sharing Story. Old characters and metaphors and wisdom. Putting it out there with an open heart and letting it do its work, whatever form that work might take – hope, acceptance, comfort, courage, defiance…”

Just then, they recognized the sound of Adam Hoffman’s voice:

This is a little close to home, but I found myself thinking about fairy tales a fair bit as I went through a medical ordeal of my own lately. I had heart valve surgery not long ago. I was scared but I tried to think of it as going into the woods in a fairy tale. Going into the woods in fairy tales is often seen as going into darkness and the unknown. It’s also where heroes are tested. Going into the woods can be scary but it needs to be done to get through to the other side. It also reminded me that as much as I didn’t want to be there I should still listen to those who are trying to help me, just like the hero needs to listen to whatever magical helpers he or she encounters on the journey.

“Magical helpers! Yes!” Sagacia was nodding enthusiastically. “Willingness to give a sincere ear to the helpers we meet along the way, no matter how unlikely they may seem, regardless of how prosaic or nonsensical or distasteful their advice sounds.”

Mary Grace Ketner brought the conversation around to a fine conclusion:

I wonder if anyone has thoughts not so much about TELLING stories TO cancer patients, but how traditional tales may be USED WITH such persons? Sorry if I skewed the original question. I’ve never been in any kind of therapy group, so I’m not sure how personal stories or true stories are used in these settings, either.

“Obviously,” said Simplia, “This topic is barely begun. But the month is almost exhausted. We better scoot to the post office before October 3 comes knocking.”

3 thoughts on ““Is it Fairy Tale Therapy we’re exploring here? Or whut?””