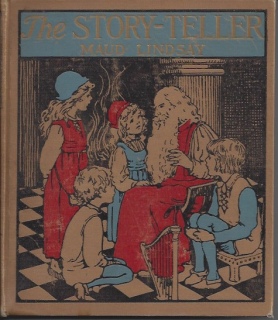 This is how REAL storytelling used to look, back in the goodle days when children’s clothes stayed clean and little boys didn’t fidget.

The front door slammed against the coat-rack. Simultaneously, Simplia made her dramatic entrance and bombastic announcement.

Sagacia finished drying the a teacup and hanging it on its hook underneath the cupboard. Then she folded her dish towel and laid it neatly on the countertop, where she smoothed out the wrinkles. Finally, she looked toward her friend, whose timing she had managed to throw off and whose outrage was starting to fizzle. Sagacia was as good at diffusing drama as Simplia was at working herself into tizzy.

“Really?” Sagacia said. “Who are we bamboozling?”

“Ourselves. Our Magical Friends. All the storytellers we know. We’re all bamboozling each other!”

“You’ve never been one to walk away from sweeping pronouncements, have you,” said Sagacia. “You should be grateful that nobody takes you very seriously, or they’d be insulted. Sit down. I’ll make you a cup of chamomile tea, and you can tell me what provoked all this.”

Five minutes later, Simplia inhaled steam from her teacup, ate the legs off a gingerbread man, and took a deep breath.

“Okay. Here it is. We — you and me, and I don’t know, probably most of our magical friends — draw comparisons between authentic folklore and contemporary personal stories. We put storytellers who specialize in traditional stories on one side of a great divide, and we put tellers who create contemporary stories on the other side. As if there really are only two sides to consider.”

Sagacia regarded her gingerbread man carefully before nibbling at its ribs.

She said, “Those are the only two sides Straddling in Strasbourg mentioned.”

“And there are so many more veins of storytelling. Beyond traditional stories, of which fairy comprise only one of many categories, you have literary tales, which have contributed their own nutrients to the compost heap of culture…”

“Exactly! Archy the Cockroach is going to go extinct unless some spoken word artist starts putting Don Marquis’s poetry into the public ear. History, for heaven’s sake. Kids aren’t getting stories about the Civil Rights Movement in school; nobody is teaching about slave resistance during the Civil War; there are famous people who are taken seriously when they ‘debunk’ the Holocaust of World War II. These aren’t personal; they’re not folklore; but stories this big need to be told again and again. But that’s only part of my point.”

“The part about there being more than two sides to every coin. Besides the front side and the back side, there’s the inside and the outside. The upside and the downside and the side that makes the circumference. And there’s also the matter of where and who and when and how and why. What’s authentic about the storytelling venues we frequent? I mean, a staged Spoken Word Performance — isn’t that just a little bit self-conscious?”

“There’s precedent for that,” Sagacia pointed out.

“But storytelling also used to be a lot more organic in the lives and activities of the people from who traditional stories sprang. Grandpa or Aunt Tessie spinning a tale while Pa was mending a harness and Little Sister hemmed dishrags around the family hearth.”

“When’s the last time you hemmed a dishrag?” asked Sagacia.

Sagacia smiled and said, “I don’t think anybody would dispute that assertion.”

“Not at all. I think if you know who you are, and if you have taken the time and trouble to discover what makes your heart beat, whatever form of self-expression you put forth will be … authentic enough.”

Simplia lifted her cup, and there on the napkin in the saucer, a message had appeared, as if out of nowhere. It was from Sharon Gilbert:

I used to work for a quilt book publisher and quilts are the same. Most of them tell a story, sometimes an elegant meticulous one, sometimes one with common fabrics and muted colors put together roughly. One of the most beautiful quilts I ever saw was put together by a 90 year old with shaking hands, the embroidery was thick and lumpy and of every color of yarn, but they glowed with such heart you couldn’t stop looking at them.