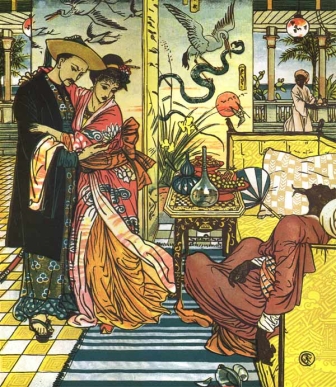 Walter Crane’s Aladdin and the missus, several years into their “happily ever after” phase. Teamwork! Together they vanquished the wicked magician. (Did you forget that the story says the action took place in China?)

“Trying to,” Simplia admitted. “But when you’re a Simpleton, the path to deep thinking is a slippery slope.” She sat down on the chesterfield and poured herself another cup of tea. “I’m pondering Happily in Hapsburg’s question concerning those newly weds who came to the end of their fairy tale with a glib statement about living happily ever after.”

“That sounds like bicycle bells.” Simplia ran to the door. “That was bicycle bells. Tarkabarka and Flossie Squashblossom are coming up the walk!”

Sagacia got up to put to put the kettle on for more tea.

As soon as they were seated and a plate of cookies was set out, Flossie cut right to the chase.

“I adore this month’s question to Vasilisa the Wise. You hear so much about family dysfunction in fairy tales… and to be fair, you wouldn’t have a story if some sort of problem didn’t rear its ugly head, but SO MUCH dysfunction gets tedious and predictable.”

“Still,” said Simplia, “too much ‘function’ in a fairy tale family, and you just have another version of The Brady Bunch.”

“True. I guess that’s why the story of Aladdin is one of my all-time favorites. That story puts the ‘fun’ in family dysfunction and ‘function’ alike.”

Tarkabarka was too busy dunking her windmill cookies to do much besides nod in enthusiastic agreement.

“Really,” Flossie asseverated. “But you have to stay with the story past the time when boy gets girl. When you read the second part of the story, you see just how strong was the bond between Aladdin and his wife. See, he starts the story as a wastrel, a nebish, a hormone-driven no-goodnik. But he is clever, and he keeps his wits about him. So when fortune deals him a stroke of luck, he shows us that he is eminently teachable. He shares his wealth, he behaves deferentially toward the sultan; over the years, he becomes a wise leader, a loving husband, and an able statesman. And that only takes you two thirds of the way through the story.”

Sagacia was familiar with this story. “That’s right!” she said. “And by the actual end of the story, he and his wife are no long young lovers. They are a seasoned couple.”

Now Tarkabarka was ready to make her contribution.

“Anait! And her husband Vachagan. A story from the Caucasus. She was a master artisan but not of royal birth, and she shocked everybody by refusing to marry Prince Vachagan, who was smitten by her brilliance as much as by her beauty. She said she’d never enter into a marriage with a man who couldn’t, if he had to, support his family by the work of his hands.”

“But he was a prince,” said Simplia. “He would never have to ply a trade.”

“That’s what he said. But she insisted, and he was really, really in love. So he learned how to weave. Might have cost him some macho points among his peers, but he was really, really in love. The marriage took place. The happy couple assumed the throne, and several years into ‘happily ever after,’ Vachagan found that knowing a trade not only came in handy, it saved his life and his kingdom.”

Flossie said under her breath, “Another teachable man. I think teachable people must live happier ever after than the ones who think they’re already smart enough.”

“Well,” Sagacia said, “that gives us two more post-honeymoon success stories to share with Happily in Hapsburg. I wonder what else is out there.”

Flossie looked at her watch and said, “I need to be on my way right now, but there is another story — a rip snorter — I’d love to tell you about. When I pass this way again.”